Tattooing has traveled a long way from its sacred origins in Indigenous communities around the world to its’ out of context arrival in North American seaports and military bases.  And has continued to evolved further from crude art form to a fine art medium.  Tattooing has in fact consistently evolved more rapidly than our society’s understanding of the medium and the people who choose to be tattooed.

Throughout the documented 5300 year history of tattooing, tattoos have been used to reflect changes in life status.  This remains exactly why so many people continue to choose to wear tattoos.  They are acknowledgements.  Bookmarks.   And while the media may continue to reinforce old stereotypes about tattoos and the people who wear them, assumptions about individuals cannot reasonably be made.  Really – we have no idea what mind blowing tattoo sleeve is under that suit coat or what captivating back piece is under that dress.  (Okay, sometimes I do because I put it there…but you know what I mean.)

And while its feasible that an estimated 17% of tattooed Americans “regrets it”, I find that statistic vague.  What in life doesn’t change?  The person we are at 40 will be (hopefully) different than the person we were at 18.  Life changes and we change with it.  And your tattoos can change with you as well.

Here’s a photo of a cover up I completed yesterday on (you guessed it) an ambitious professional.  There’s an old saying that goes, ” The only difference between tattooed people and non-tattooed people is that tattooed people don’t care if you don’t have a tattoo”. 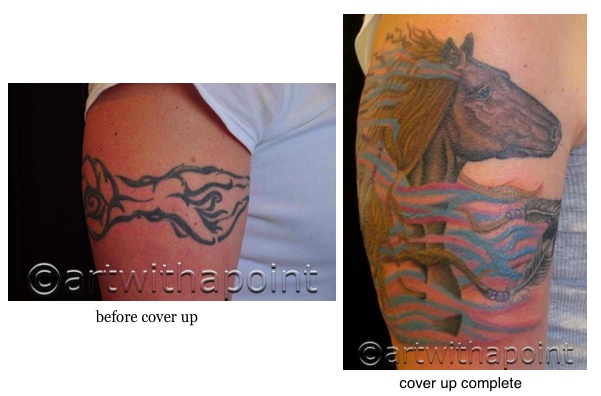