Mehndi (also known as “Henna”) has, for many in Western culture, become a fashionable way to test drive a tattoo. Mehndi itself is a body art tradition dating back to the 12th Century whereupon Henna paste is painted on the body as an aspect of festive celebration. Straight up, this is the short version of specific and sacred traditions found in multiple Eastern cultures. Sorry for such an abbreviated explanation, but hey – this is a blog entry after all… right?

Anyway, the Henna paste is left to dry for several hours and then removed. The intricate and elaborate stained designs that remain last for weeks. As this form of body art has gained popularity in the west, I’ve received requests to replicate this Henna look in the medium of permanent tattoo. While certain aspects of Mehndi and Henna body art lend themselves nicely to tattooing, the translation from Henna to the medium of tattooing has its limitations. For example, intricate detailing applied temporarily to the surface of the skin can be rendered more finely than intricate permanent detailing within the skin due primarily to how skin changes over time. The piece highlighted here took some strategizing in terms of balancing size with detail as well as use of color, and hey – it turned out pretty sweet! 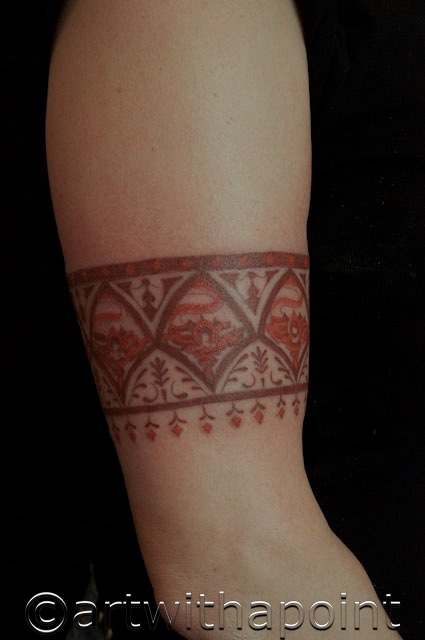 Do It Your WayThe Context of Pain
Scroll to top